Since John Day Ferguson gave the money to start the library, the library was named after him.  John Day Ferguson was a lawyer who moved with his family from New York City to Stamford when he was ten years old (in 1842).  He was a great supporter of education in Stamford.  In fact, because of everything he did for Stamford’s schools, the schools closed in his honor on the day of his funeral. 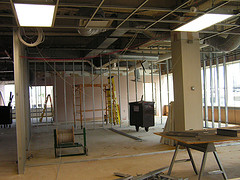 No, in 1882, borrowers had to pay $2 a year to take books from the Library.
That fee was later reduced to $1 a year.  In 1911, The Ferguson Library became a free public library.  The plan for making the library free was introduced in 1909 by Schuyler Merritt, who was the treasurer of the Library’s board of directors.

The bookmobile, which began service in 1940, was the first branch in operation.  It was followed by the Weed Memorial Branch in 1954, The Turn of River Branch in 1967, and the South End Branch in 1970.

The original Turn of River Branch was built in a converted church and parsonage on High Ridge Road.  In 1980, four portable classrooms were added to provide a children’s area and a meeting/program room.  In 2000, the Turn of River Branch moved from High Ridge Road to its present location on Vine Road.  With the move came a name change to the Harry Bennett Branch.  Harry Bennett gave money to build the new branch.  He liked children so much that he sometimes came to children’s programs at the library.

There have been a number of new bookmobiles over the years.  The early bookmobiles were trucks or trailers pulled by trucks.  The first self-contained bookmobile started serving Stamford in 1975.  The most recent bookmobile, the seventh, took to the streets of Stamford in 2000 offering books, and movies.  At times, programs have been held on the bookmobile.

The Weed Memorial Branch was originally named after Jennie Weed, who donated the building for the library.  The building was originally a house, built in 1810.  The Weed Branch never moved but it was expanded and renovated in 2006, and the name was changed to the Weed Memorial and Hollander Branch.  The Hollanders are a Stamford family who donated money to help pay for the improvements made to the branch.  During the renovation, the bookmobile parked in front of the library, so Springdale neighborhood users would continue to have library service.

The South End Branch has stayed in the same location, but it was renovated in 1997.  The neighborhood has changed a lot over the years, too.  Now
the South End branch serves many Spanish-speaking families that are new to Stamford. 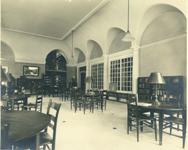 No. Library hours have changed through the years.  Until recently, the library was closed on Sundays during the summer months, and the Main library started opening earlier, at 9:00 a few years ago, when the corporation Pitney Bowes donated money to cover the cost of the extra hour per day.  In 1971, the library experimented with keeping the children’s room open two evenings a week.  This was such a success that in 1985 evening service expanded from two evenings to four each week.

Story hours, where librarians read books to young children, are an important
part of library services for kids, and one way that parents can help their preschoolers get ready for reading themselves. Story hours have been a part of the library’s service for children for 100 years or more.

For many years, story hours were for older preschoolers, but over time programs for younger and younger children were added.  Mother Goose, for toddlers age 1 ½ to 2 ½ was started in 1986.  With the new millennium, the library added Babytime, a story hour for pre-walking babies.  Now,
even newborns can come to the library to hear stories and songs.

Consider this: Look at the pictures of an early story time in 1911, and this one from the library in the 21st century.  What are some things that are the same?  What is different?

Librarians tell stories on class visits, at festivals and for holidays (like scary story programs for Halloween). The librarians also support the schools when they hold storytelling competitions, providing books and sometimes acting as judges.

Before 1988 many of the library’s children’s programs (almost half) were done out in the community.  For example, in 1976-77, the librarians.

For many years, free movies at the library have been a special treat. Early films were shown reel to reel or sometimes on filmstrips. In fact, the library used to have a special department to take care of and show films. 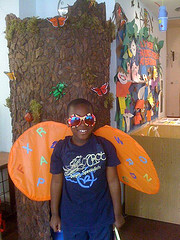 Many well-known authors and illustrators have delighted both children and adults at the library.  Since 1985, the Jeanne Rhinehart lecture (named after a long-time Ferguson Library children’s librarian) is presented free to the public each November.

Some of the famous authors and illustrators who have spoken or led workshops at the library are:

Challenge:  Look in the library’s catalog for books by one or more of these authors or illustrators.  Do you have a favorite author you would like to see at the library someday?

The Summer Reading Club has long been a highlight of the year at The Ferguson Library, and the program continues to grow.  In 1975, 58 children got certificates for finishing the club.  That year, in honor of the nation’s bicentennial, the theme was “America’s Birthday Celebration”.  In 2007, the theme was “Get a Clue @ the Library”, and 1,677 children finished the program and got a certificate. In 2008, the theme was “Catch the Reading Bug @ The Ferguson Library”.  Children were able to dress up as bugs and sit in the Enchanted Tree at the Main Library. 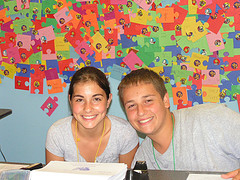 As the children’s room grew over the years, teens were recruited to help the librarians after school and during the summer.  The first teen volunteers began working at the Main Library in March 1995.  There were about 20 teens helping out during that school year.

The summer teen volunteer program began soon after and many middle and high school students now spend part of their summer helping librarians run the summer reading club. In 2008, more than 330 teens were trained to be summer volunteers.

Through the years the library has kept up with changes in technology. When music was only available on long-playing vinyl records, you could check those out of the library.  As we switched to audiocassettes, those became available.  The library started to make music CDs available to the public in 1995.

It was the same for movies and other films.  Not only were they shown at the library, but slides and filmstrips could be taken home by library users.  In 1979-80, 209 filmstrips were checked out. In 1987 the library started circulating movies on videocassettes (VCR tapes).  DVDs, which were first available at the library in 1999, are very popular today.  In 2008, the Main Library alone had over 1000 DVDs for children.

Computers were not a part of the library until the 1970’s, when the processing of books was computerized.

Until 1985, the library had a card catalog, instead of the online catalog we have today.  Little cards were filed in drawers, and each book had a card for its title, author and subject, so you could find a book in the catalog in several ways.  The online catalog makes it easier to find materials in the library. This picture shows someone using a card catalog at Cornell University.  It was reprinted with the permission of Cornell University.)

The Internet came to The Ferguson Library in 1995. Stamford was the first city or town in Connecticut to provide public Internet access at the library.  The library’s first Internet webpage was also created in 1995.

With the start of the 21st century, computers were everywhere in the library.  The library keeps adding more and morecomputer services each year and also offers help to people learning how to use them.

Computerized information sources (like encyclopedias) called databases, became available to the public through the library’s webpage.  Now you can do research using the library’s resources from the comfort of your home.  We call this the Virtual Library.

In 2000 the library started circulating ebooks. You could now download a book to your computer or MP3 player.  At the digital bookmobile in 2008,
library users got a chance to try out some of these new technologies.

Wifi (wireless Internet access) was introduced at the library in 2004.

Also in 2004, the library began to offer online homework help.  From computers at the library or from home, students can “chat” with live tutors in a number of subject areas.

In 2006, online live reference help was added to the library’s many computer services.

In June, 2008, the library began its third major renovation of the Main Library.  The building was changed so that people with disabilities will have an easier time using the library.  A special area was added for teens.  The children’s room was redesigned and redecorated. The new Youth Services area opened in November 2009.

We know that technology will keep changing at a rapid rate, and the library plans to keep up, using new technologies to make it easier to serve the public and offering new types of materials for people to take home as they are developed (just as we moved from vinyl records to audiocassettes to CDs). We hope that as you grow, the Ferguson Library continues to be an important part of your life.

Trivia: There is a plaque honoring John Day Ferguson at the Main Library.  Do you know where it is?

Something many people in Stamford use every day is named after Schuyler Merritt. Do you know what it is?

Look in the library’s online catalog.  Does the library still have the book Little Men?