In 1640 Captain Nathaniel Turner from New Haven bought the land from the Native Americans.  He then sold it to men from Wethersfield.  In 1642 these settlers gave it the name “Stamford”.  The name comes from a town in Lincolnshire, England.  More than 80% of the settlers in New England came from that region in England.

To find out more about Stamford’s beginnings, visit Stamford Through the Centuries.

Stamford Through the Centuries 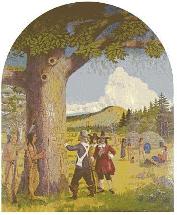 Originally, Stamford was a town, with a town meeting form of government. In 1893, a city charter was adopted, creating the city of Stamford. The city contained the southern one-fifth of Stamford (south of Bull’s Head, minus Glenbrook and an area in the west). Four-fifths of the people who lived in Stamford at the time lived in the city.  For the first time, Stamford had a mayor and a city council. People who lived in the city were still residents of the town, and they paid taxes to both governments. This double government lasted for 56 years, until 1949, when a new charter went into effect. This charter called for a mayor and a 40 member board of representatives to govern the city. Now the basic structure of the Stamford government includes the mayor, a board of representatives and a board of finance.

In 1641 Stamford was settled by 28 Puritan families from Wethersfield, the first town settled in Connecticut.  In 2000, 117,000 people lived in Stamford.  About one-third of them were born in other countries. Some of the countries Stamford immigrants come from are Haiti, Guatemala, India, Russia, Poland, Jamaica, Colombia, China, Mexico and Peru.

It takes less than an hour to get to New York City by car or train from Stamford (The Stamford Transportation Center train station is 33 miles from Grand Central Station in Manhattan). Many people who live in Stamford work in New York City or go there to shop or to visit museums and theatres.

Since the mid-1800s, people have been moving to Stamford to live, while they commute to New York for work.

A resident of Stamford is a Stamfordite. Stamford was once known as “The Lock City” because the Yale & Towne Manufacturing Company, which made locks and keys, was located in Stamford’s South End.

When Yale & Towne moved away in the 1950s, Stamford became “The Research City,” because research laboratories and high-tech companies opened in Stamford.

Today, Stamford can be called “The Corporate City,” because it is home to many important corporations like UBS and Pitney Bowes. 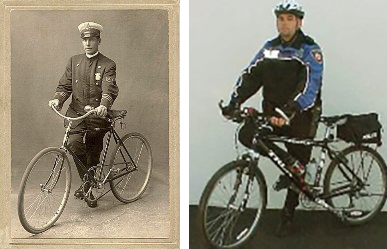 Historical and current photo of the policemen with their bicycles. 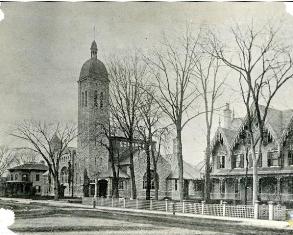